By Sarah TackettOctober 1, 2020No Comments

Five years ago, Annia Ciezadlo and Shahab Sirvani moved into a Beirut apartment together without ever having met. Their apartment had a spacious kitchen with a sofa next to the refrigerator (a Mediterranean thing). They spent hours in that kitchen, cooking and eating and talking politics into the night. At one point, Shahab’s mother visited, bearing packages of ground walnuts and dried plums and other ingredients for fesenjoon, the legendary Persian dish that is as delicious as it is notoriously difficult to get right. With this recipe, they invite you into their kitchen. 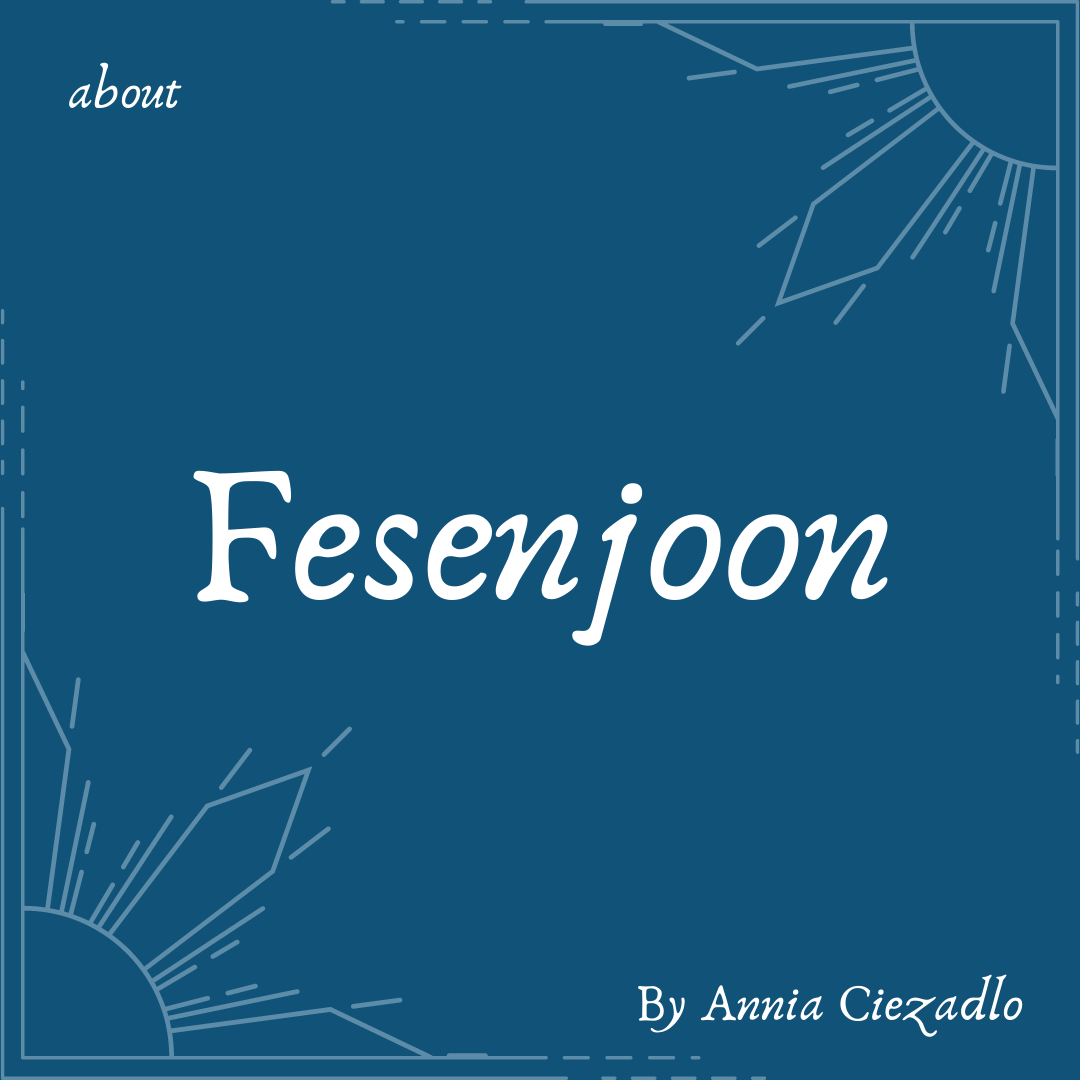 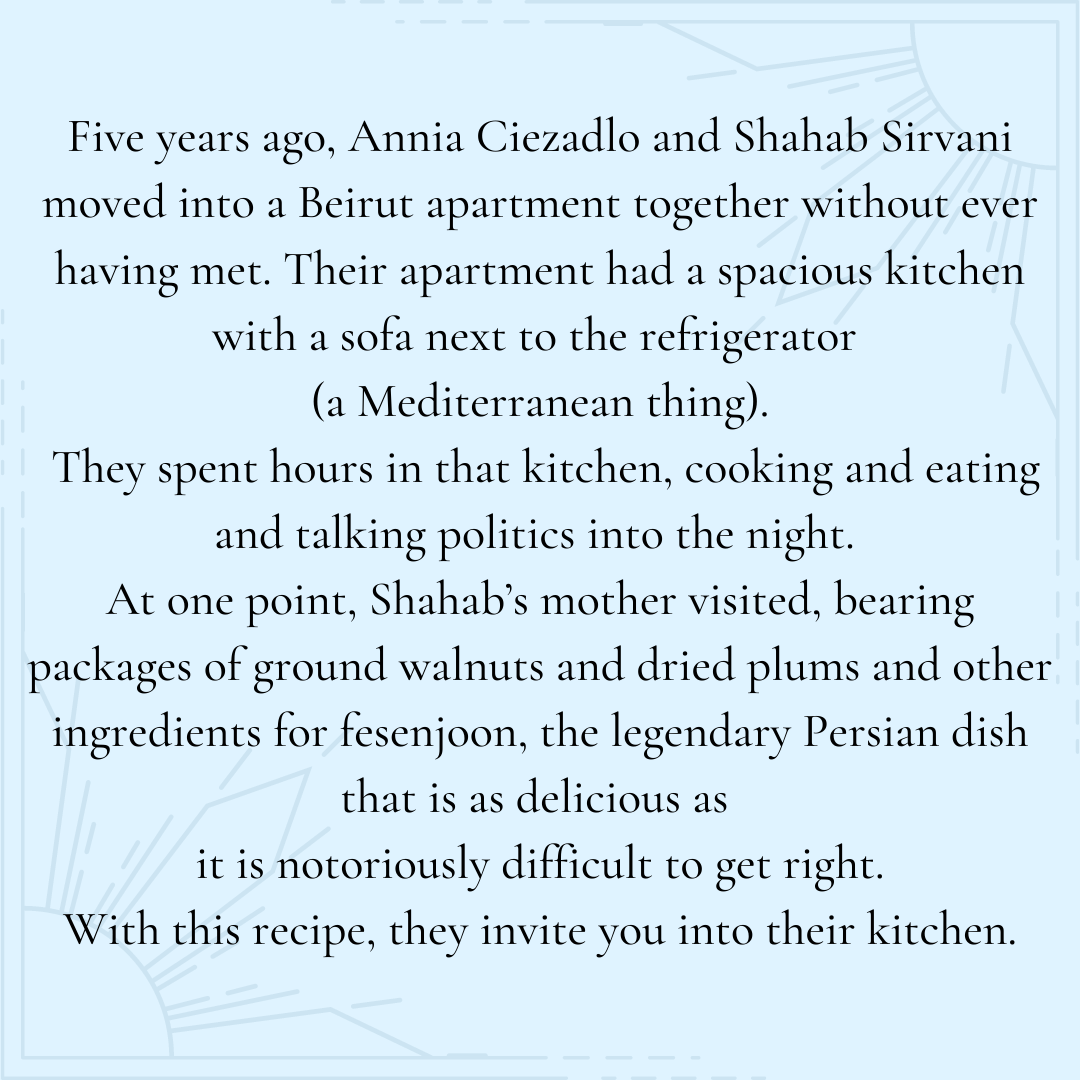 Dear Shahab: Do you remember our Beirut kitchen, with the sofa right next to the refrigerator? The hours we spent sitting on that dusty blue velvet sofa, drinking and smoking and talking politics into the night? By the time we finished and staggered off to bed, we’d have solved the world’s problems, at least for that night.

After you left, we had a Nowruz party in your honor. Ezgi made all kinds of Turkish things. I made some meze and your mom’s fesenjoon (with some additions from some Iranian recipe writers I like). It turned out awesome—or at least, not an international embarrassment, like the first time we tried to recreate your mother’s fesenjoon.

Here’s the recipe. I finally wrote it down. Let me know if I forgot anything.

How are you? How is your mother? How are the new sanctions affecting you guys?

1 Tbsp or so of olive oil

2 or so cups of water, room temperature

A big skillet or sayniyyeh (round cooking tray)

A medium-large mixing bowl. It should be heat-safe (i.e., metal or porcelain or glass, not plastic)

My dear Annia, you asked if you forgot anything in the recipe for fesenjoon. You also asked about the new sanctions that our Uncle Trump has imposed on Iran. Ahh there is a lot to say about them, maybe in another email, maybe another evening, somewhere, chain smoking, drinking our cheap beer or wine, and talking and talking.

My dearest humble correspondent, I will try to answer both of your questions.

Yours in all the worlds

In the fall of 2003, Annia left New York City for Baghdad, and then Beirut. For the next fifteen years, she wrote about war and conflict. Her nonfiction writing from Iraq, Syria, and Lebanon appeared in publications from The New York Times and The Washington Post to Granta, Guernica, and The Nation.

She used years of experience to write an award-winning book that looked at war in the Middle East as no one else had: by writing about civilians and their daily struggles over food. By focusing on civilians and their everyday lives, Day of Honey: A Memoir of Food, Love, and War (Free Press, 2011) succeeded in getting Americans to see Middle Easterners as real people, not media-driven stereotypes. Readers sent emails saying the book had made them see the region in a completely different way: “First time I could see the Middle East’s religious conflicts impact on people,” wrote one. Another said the book “gave me the window to the Middle East that I wanted to look through… rather than the media’s vision.” People she’d never met invited me to home-cooked dinners with their families.

Day of Honey won numerous awards, including the Dayton Literary Peace Prize (runner-up, Nonfiction). It was translated into four languages, earned glowing reviews in dozens of publications, and appeared on numerous “best of” lists. In its review, The New York Times called the book “among the least political, and most intimate and valuable, to have come out of the Iraq war.”

My vision of peace is a giant kitchen—or banquet cloth, or fire, or circle, because not everyone eats Western-style at a table. Everyone shares. Everyone gets seconds or thirds if they want them. Nobody goes hungry. We all bring what we have and offer it freely. I practice this in my daily life in three ways: first, by sharing what I have with others—specifically, by giving food or money to whoever asks me for it. In Beirut, where hungry women and children from Syria and Palestine beg in the streets, I gave out powdered milk (a highly coveted item) and date cakes (which the children loved). Second, by eating as sustainably as possible, in order to promote peace by conserving the earth’s resources. And thirdly, by bringing together people from different walks of life over food: for example, by having a dinner party for Nowruz, or Greek Easter, or Ashura, and sharing food traditions with diverse groups of people. We can’t do this in person now, with coronavirus; my peace offering will be part of an ongoing process of exploring ways we can use virtual spaces to break bread, build peace, and create community together.