By Sarah TackettSeptember 17, 2020No Comments

“My Peace Offering is a speculative piece of a post-COVID-19 world from the view of descendants from Kanaka Maoli and other indigenous communities in the Pacific Ocean and Americas. The piece is inspired by how Brother Israel’s “Hawaii 78′” sings of what our ancestors would think of modern city life. It explores how we have failed in this pandemic and other epidemics that indigenous communities have endured since colonization. Dedicated to our dead and descendants, the piece explores the solutions and changes needed to survive COVID-19 and ensure that a pandemic like this never occurs again.” 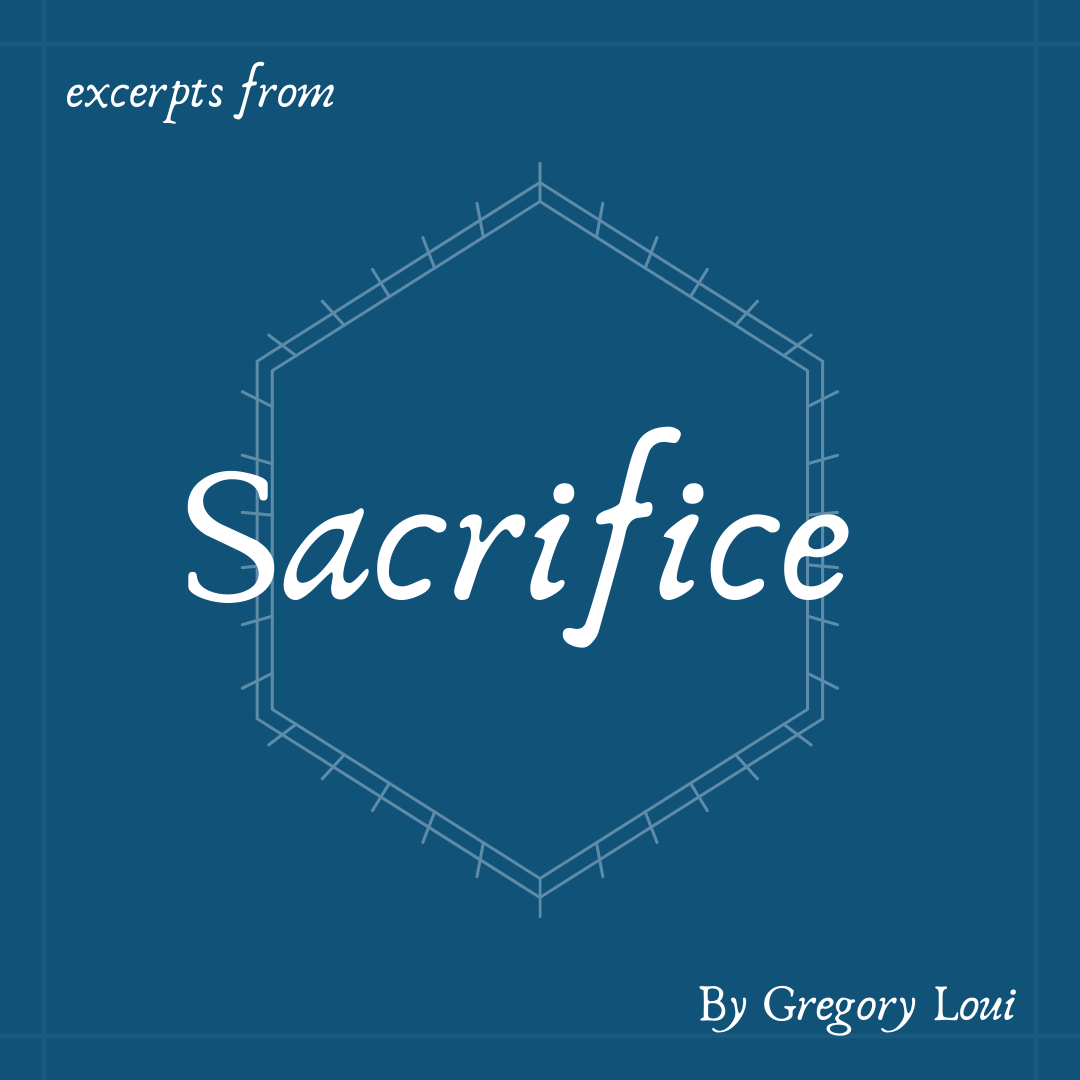 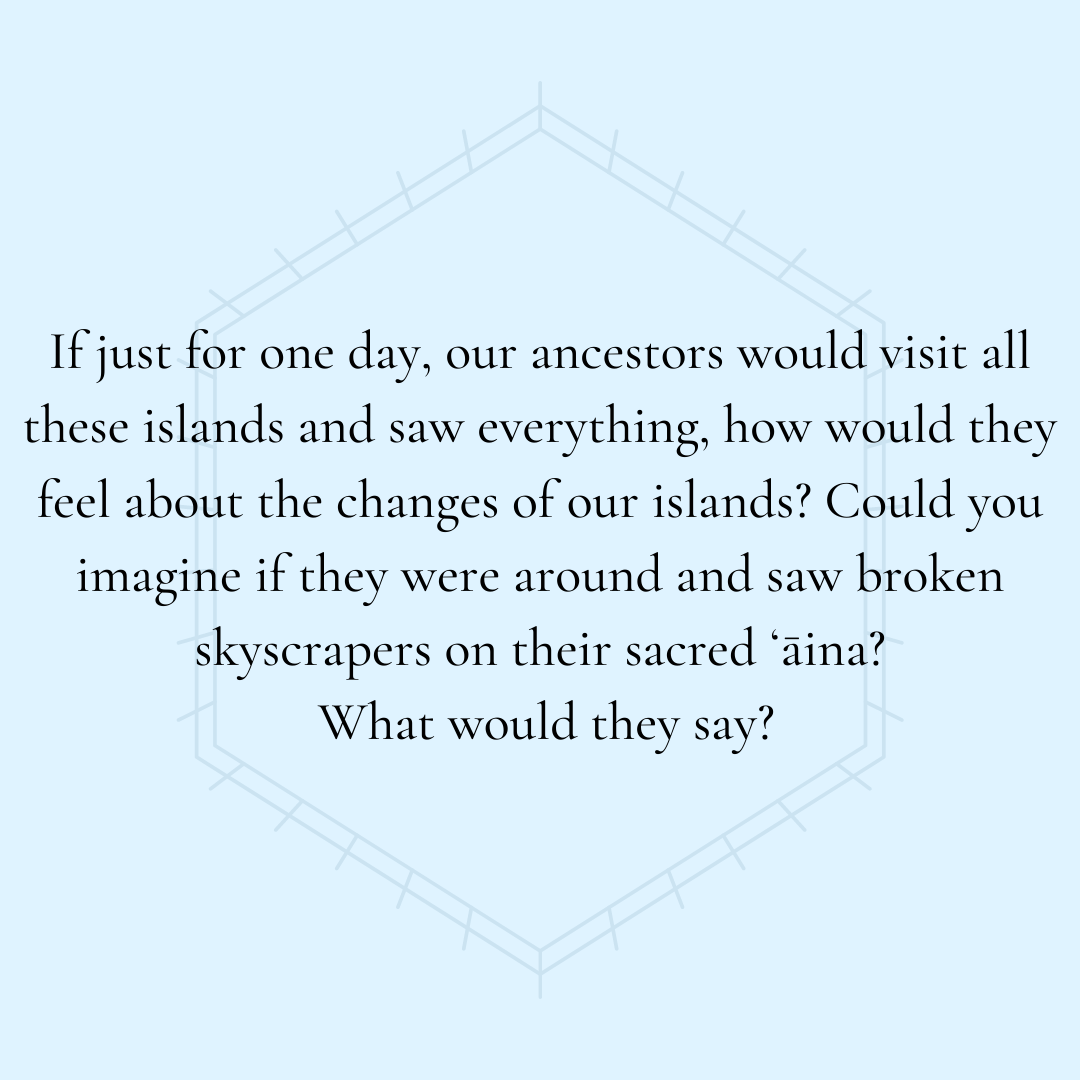 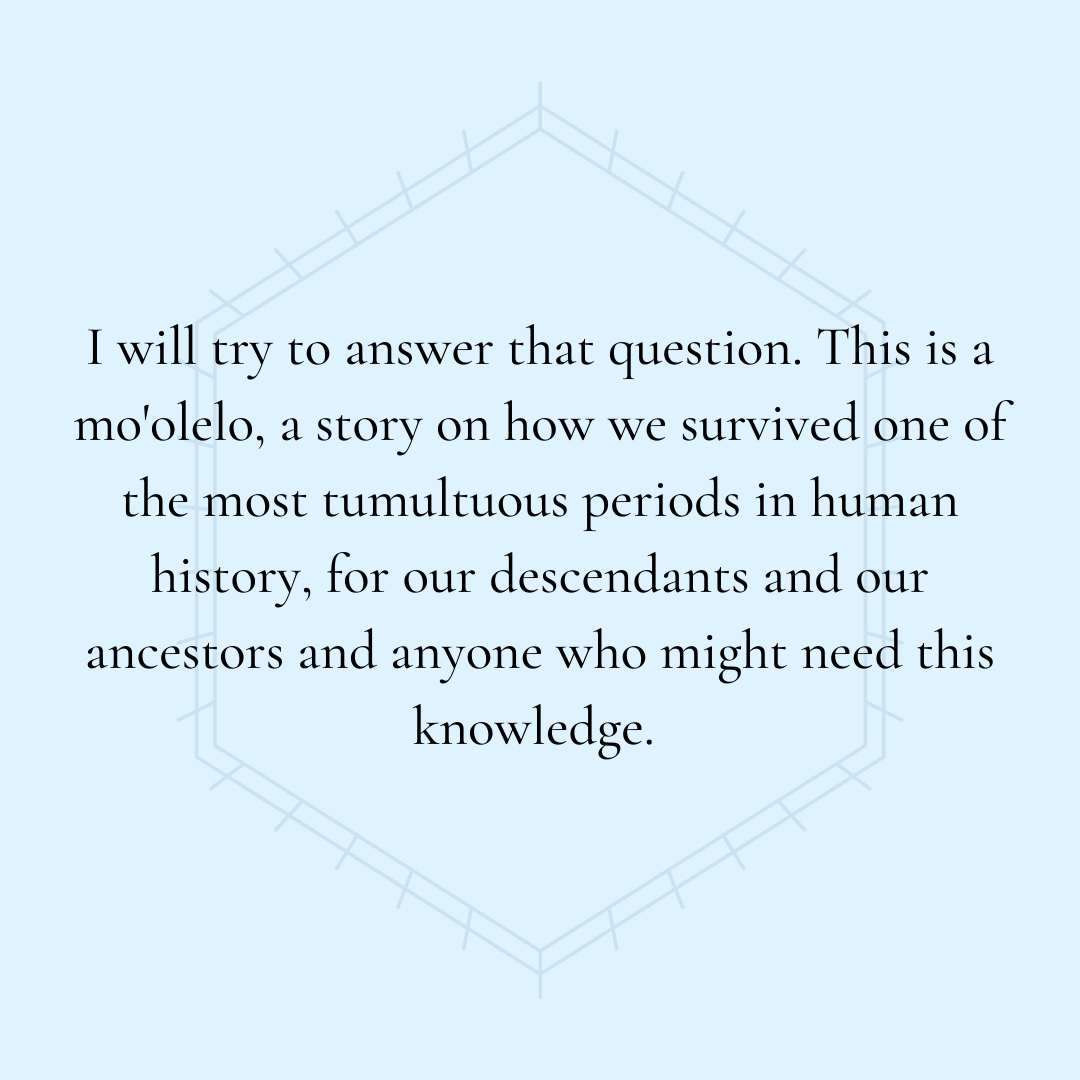 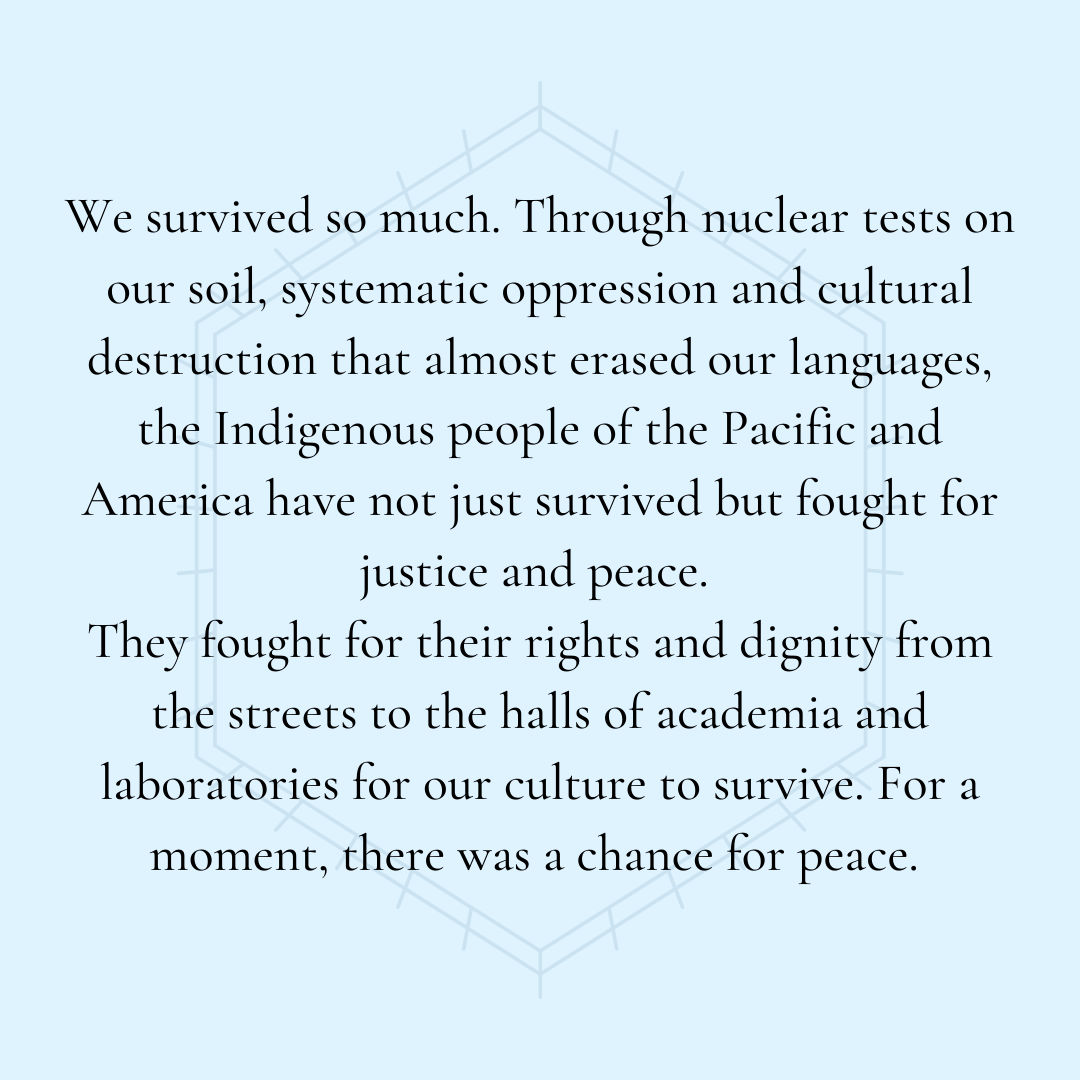 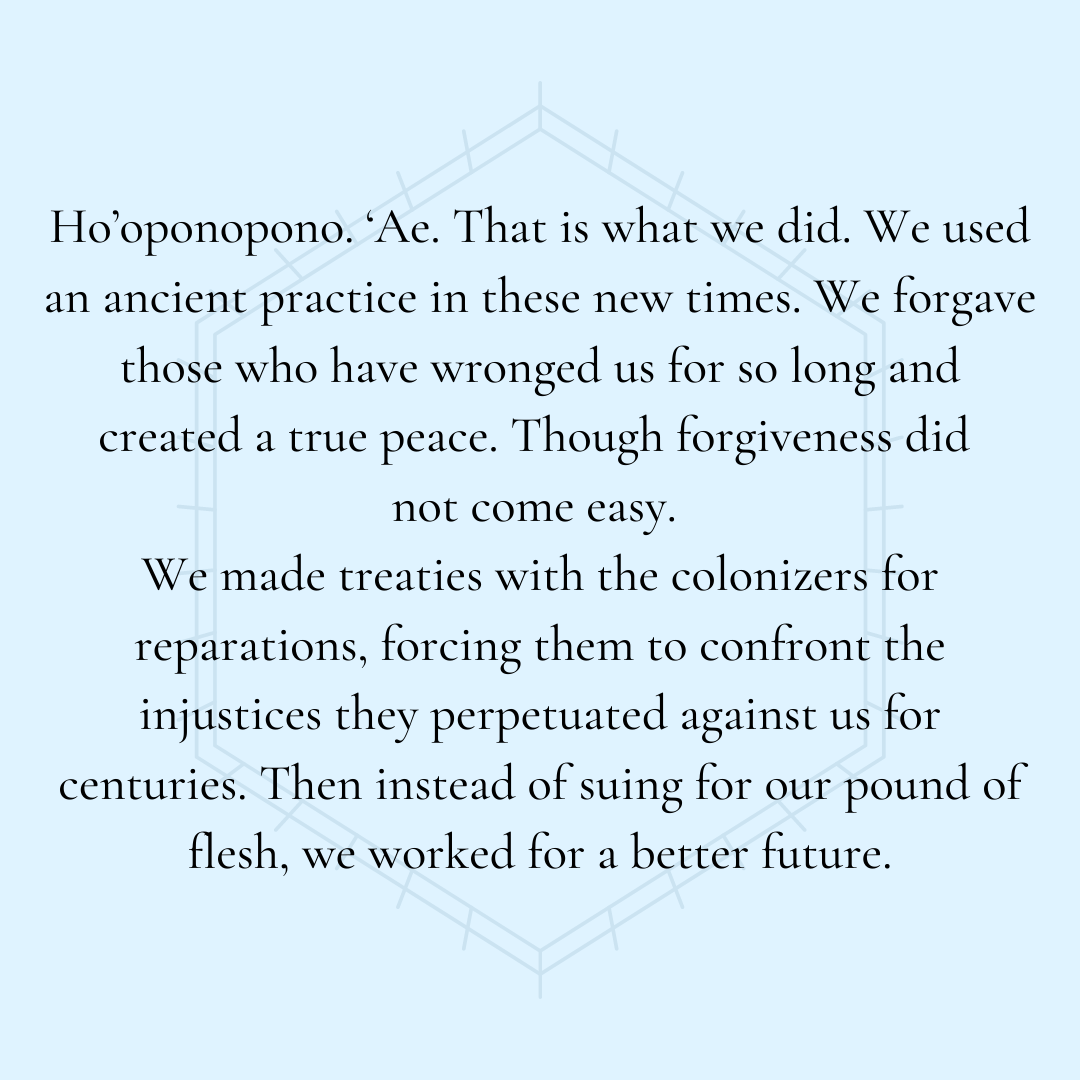 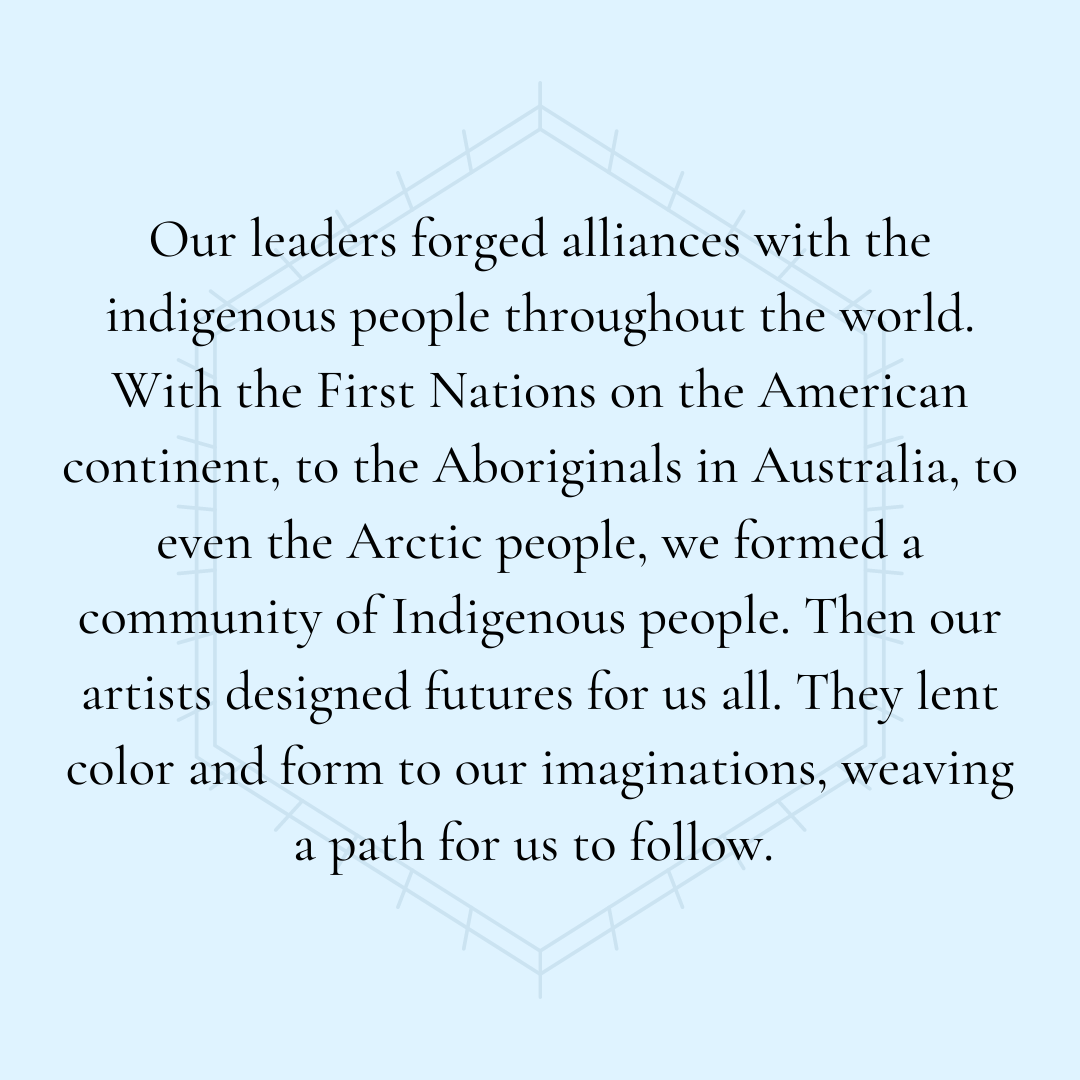 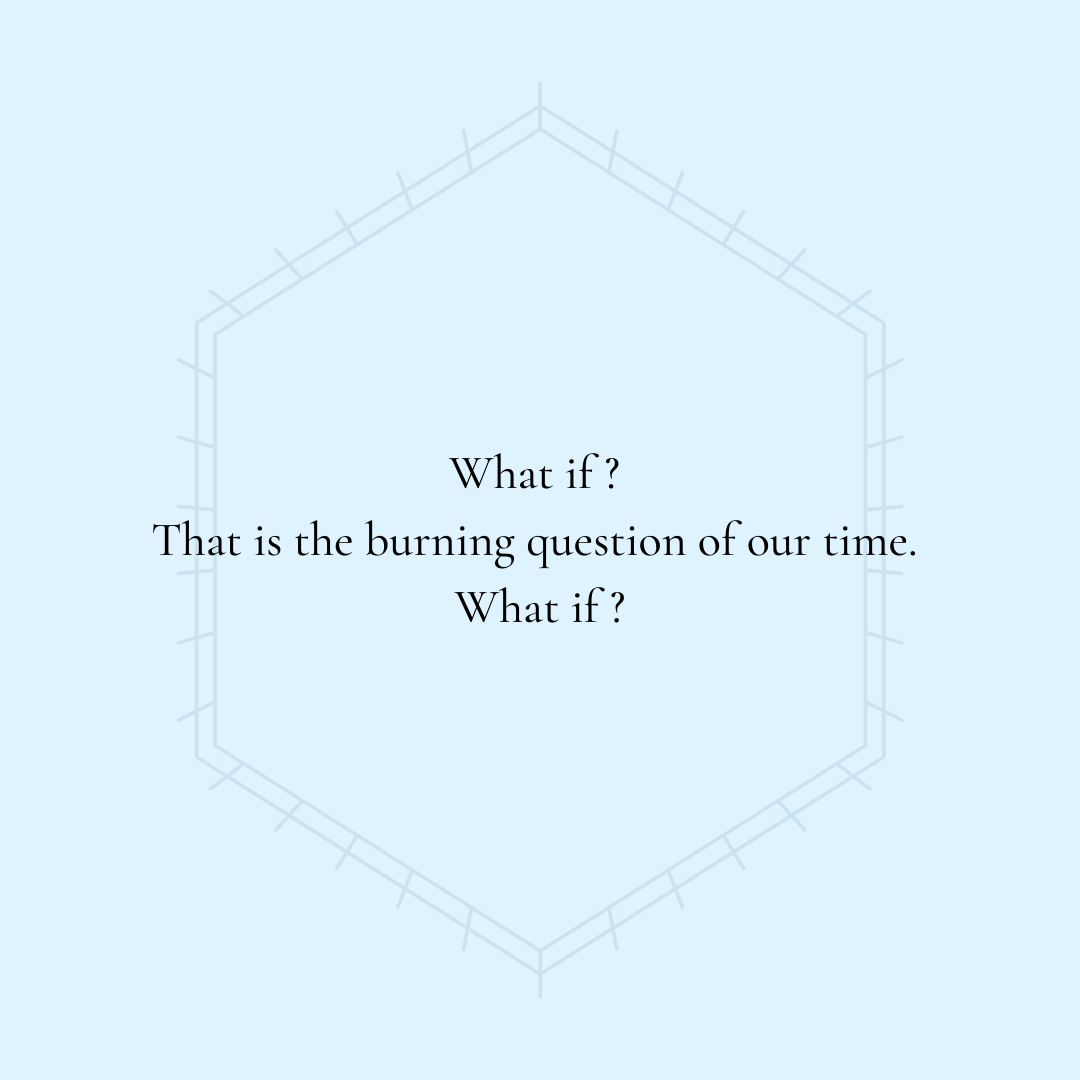 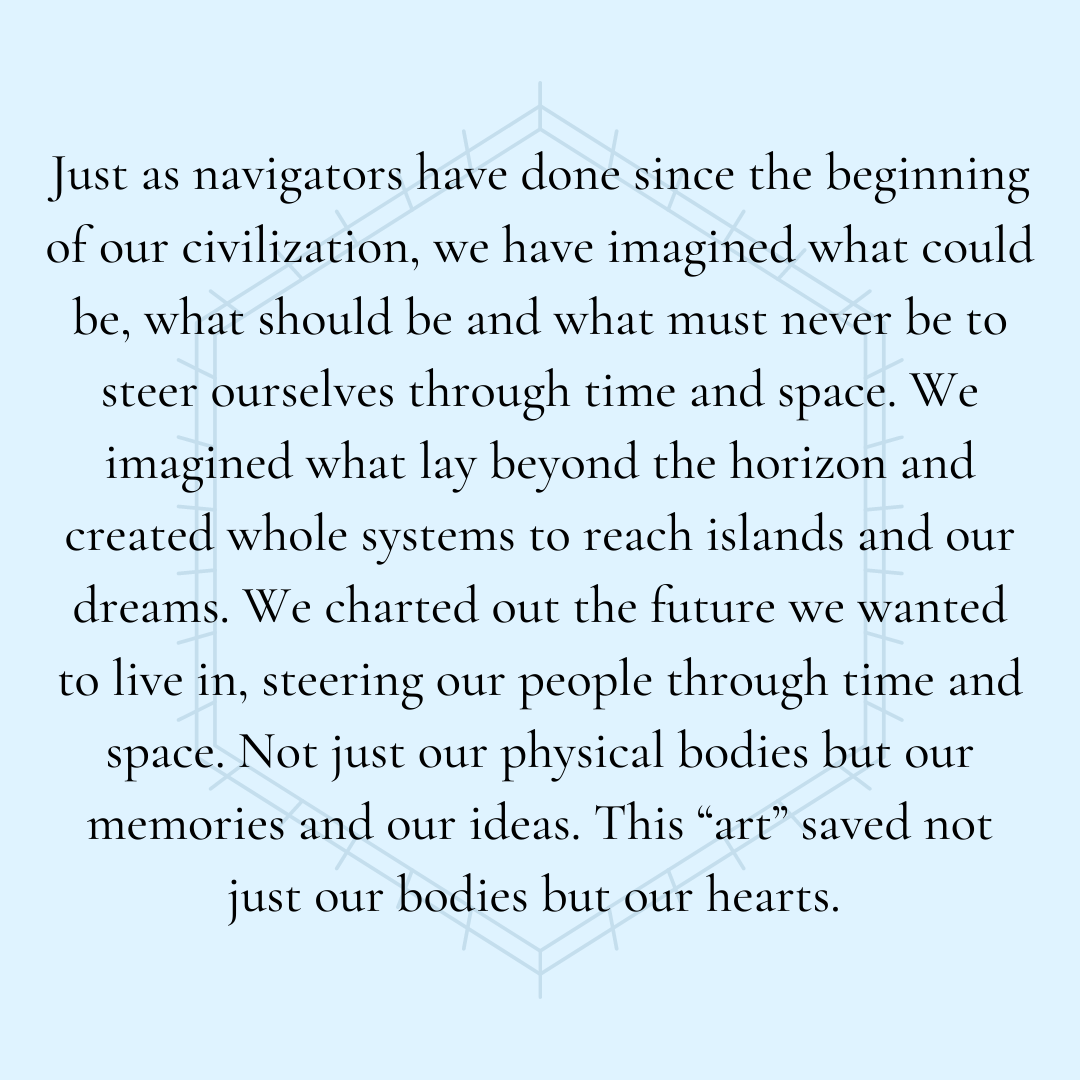 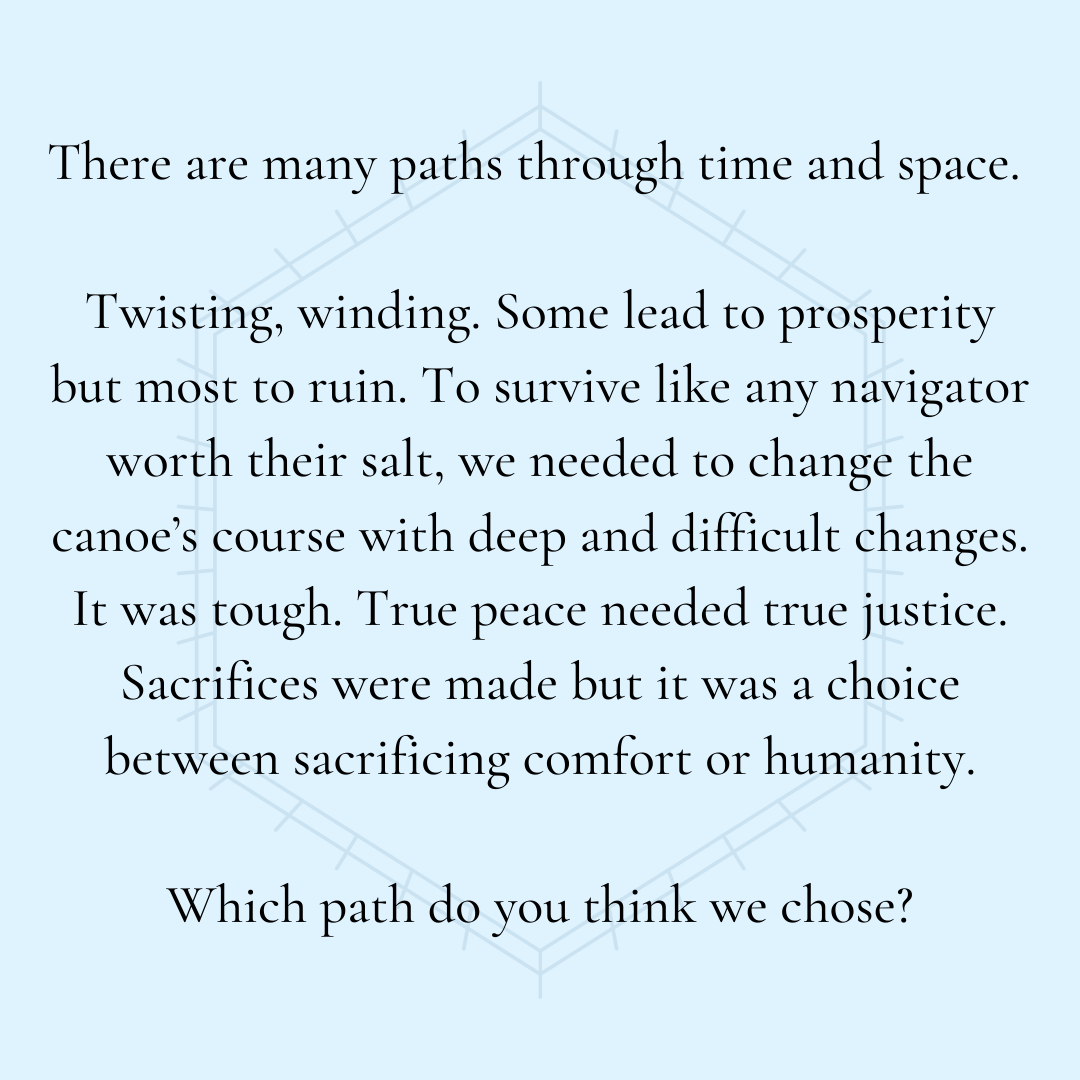 If just for one day, our ancestors would visit all these islands and saw everything, how would they feel about the changes of our islands? Could you imagine if they were around and saw broken skyscrapers on their sacred ʻāina? What would they say?

I will try to answer that question. This is a mo’olelo, a story on how we survived one of the most tumultuous periods in human history, for our descendants and our ancestors and anyone who might need this knowledge.

We are voyagers and explorers. Our people mastered the ocean, voyaging unimaginable distances when the rest of the world wouldn’t lose sight of the shore. Guided by starlight and currents, sailing based on vast systems of scientific navigation and carrying carefully curated canoe plants to sustain life, we discovered islands and crafted the ecosystem to support generations to come.

Then the plagues arrived.

Brought by European colonists, who were guided by greed and domination, these plagues spread like wildfire through our people. An entire generation of keiki never saw their first birthday. From the First Nations on the continent to our islands, diseases ravaged the Indigenous people of the New World, reducing us from millions to mere thousands. Yet, we survived.

We survived so much. Through nuclear tests on our soil, systematic oppression and cultural destruction that almost erased our languages, the Indigenous people of the Pacific and America have not just survived but fought for justice and peace. They fought for their rights and dignity from the streets to the halls of academia and laboratories for our culture to survive. For a moment, there was a chance for peace.

Then another plague arose.

COVID-19. The news said it came from China. The whole world shuddered and turned to their own in a time when we needed a unified response to a global pandemic. And the United States… oh, the United States fucked up. Maskless masses, fifty squabbling states and the leader of the most powerful country screaming like a baby. And you know who suffered?

The Indigenous people once again.

The Navajo had the most cases in the US per capita. A hospital in Seattle was sent body bags instead of medical equipment. The tribes in the Amazon were pincered by the illness and colonizers. As fortune would have it, the Pacific was mostly spared though trade disruptions ravaged local economies. Our people needed help but there was little response from those in power.

For all the pain that had come, an even greater threat loomed on the horizon as the world burned. A wave that had been building for centuries. For all the horror and suffering that COVID-19 had brought, the climate crisis was far greater. Over a billion people became refugees as they fled their flooding or burning homelands. More diseases bloomed in the heat and infected these refugees. Just one more tragedy to the pile as our world died once again.

We are survivors of the apocalypse twice over now.

There is anger. It is righteous anger born from the centuries of pain we suffered through no fault of our own. We had every right to take revenge. Yet we rose above.

I look around. I see how we failed. I look at the broken skyscrapers, monolithic monuments to every disaster the world inflicted upon us. I see the ways that the colonizers ripped away our lands, our people and our very spirits to enrich themselves. I see how the rest of the world failed to save us. Again and again, we have been sacrificed in this march towards so-called progress. Sacrificed to clear a path for colonization. Sacrificed and left for dead. Sacrificed to avoid an inconvenient truth.

Far away from broken skyscrapers, past the recovered reefs are our new homes. Out on the ocean, we have reclaimed our heritage as voyagers and created great ship-cities on the waves so we never have to worry about the rising tides. We protect vast swatches of the Pacific to preserve life on the planet. We united with the outer world to help stop the great plague. We used this horror as an opportunity to create something new.

Ho’oponopono. ‘Ae. That is what we did. We used an ancient practice in these new times. We forgave those who have wronged us for so long and created a true peace. Though forgiveness did not come easy. We made treaties with the colonizers for reparations, forcing them to confront the injustices they perpetuated against us for centuries. Then instead of suing for our pound of flesh, we worked for a better future.

Every person in our islands worked together in their own separate ways. Our entrepreneurs invested in sustainable power sources and our own agriculture so we no longer needed to rely on importing essential resources. We brought our best and brightest youth back to the islands instead of letting them fly away to greener pastures. Like restoring an ecosystem ravaged by invasive species and erosion, our scientists brought back the native species and ways of living. However, we bolstered these indigenous systems with new knowledge and technology gained in the 21st century.

Our leaders forged alliances with the indigenous people throughout the world. With the First Nations on the American continent, to the Aboriginals in Australia, to even the Arctic people, we formed a community of Indigenous people. Then our artists designed futures for us all. They lent color and form to our imaginations, weaving a path for us to follow.

There was resistance, of course.

So many, many people couldn’t see the threat that was coming or stuck their heads in the ground instead of facing it head on. Too many. Even those who saw what was coming couldn’t do anything because we were too busy fighting each other. We were so close to ruin.

What if we had failed?

What if? That is the burning question of our time. What if?

We might have survived, sure. Climate refugees could have fled to the continents but what would have survived? Just our blood and our bodies. Not our culture, not our art, not our mo’olelo. Who we are would not have survived. And how would that be different from the past, the first plague?

Just as navigators have done since the beginning of our civilization, we have imagined what could be, what should be and what must never be to steer ourselves through time and space. We imagined what lay beyond the horizon and created whole systems to reach islands and our dreams. We charted out the future we wanted to live in, steering our people through time and space. Not just our physical bodies but our memories and our ideas. This “art” saved not just our bodies but our hearts.

Some know the process as Pasifika Futurism or simply imagination but it was ingrained into our culture in the form of navigation. Our masters navigators would say, “To know where you are going, you need to know where you are from” because we need to draw from our past to understand the future. Truly, to understand where the va’a is going and how to keep the va’a safe, mapping out safe vs dangerous routes, the navigators needed to absorb every little detail in their environment. That same process is alive in how Pasifika Futurists can look at little details in the past or present that might ripple out to have larger effects on the future, visualizing the future scenarios that might befall our people.

Pasifika Futurists are our new navigators, the latest descendant of a lineage that goes back to the beginning of time. The past is never truly dead. The future is never out of reach. The present is the intersection between all that was and what could be.

We are the Indigenous people of the New World because this world is born anew everytime we rise from the ashes of the old. We prepare for a new world once again, after a long voyage through the old world broken by colonization and greed.

If for just one day, our descendants a thousand years in the future would find this mo’olelo, what would they say? If they visited all these lands and saw everything, how would they feel about the changes of our land? Could you just imagine if they were around and saw broken skyscrapers on their sacred ʻāina? What would they say?

I don’t know but I know what I would say to them. I would say, “We tried.”

There are many paths through time and space. Twisting, winding. Some lead to prosperity but most to ruin. To survive like any navigator worth their salt, we needed to change the canoe’s course with deep and difficult changes. It was tough. True peace needed true justice. Sacrifices were made but it was a choice between sacrificing comfort or humanity.

Which path do you think we chose? 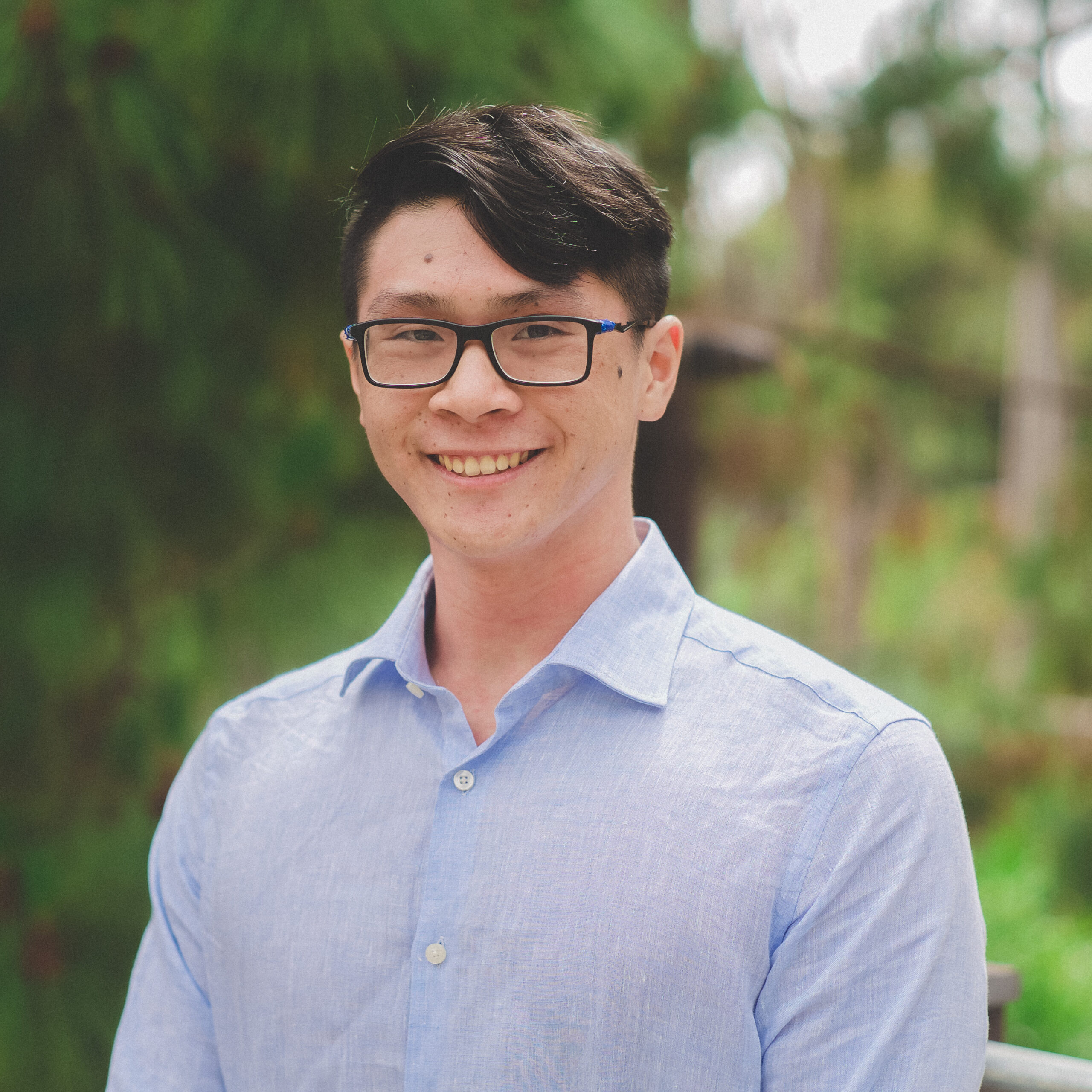 Descended from Chinese immigrants and Kanaka Maoli voyagers, Greg Loui always had to explore different identities as a person of mixed heritage in America and Hawaiʻi. He was also obsessed with science-fiction as a keiki and searched for a career to express that creativity. After learning to combine his heritage with storytelling through the Speculative Design program at UC San Diego, Greg found that career as he explores past, present, and future through Pasifika Futurism.

Please learn about your home’s history and the conflict in its creation. Learn the true history of the honored and forgotten, the spilled blood, the oppression of minorities, and how this affects the present. Then pass what you learned forward so we don’t repeat the past and create real peace.